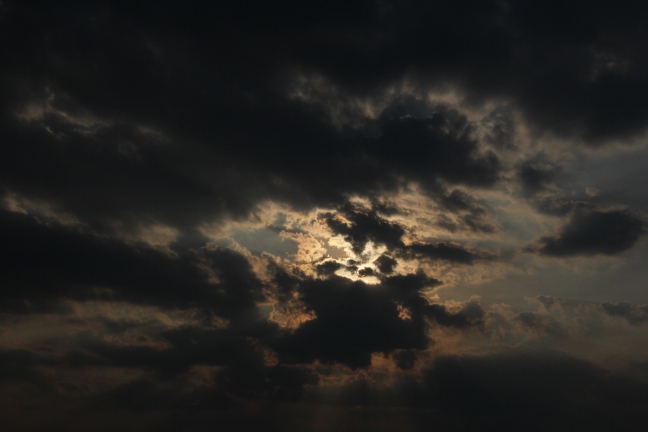 There is something very calming about a sky after a rain storm. After weeks of doing rain dances and wishing for something, anything, to water our thirsty trees, we finally got some following several weeks of flash-drought (that’s what they’re calling it now).

Cropped out was football practice for many
and middle school below the levee.

The purpose of my outing was not this beautiful sky, though it was certainly nice to be out under it. I had other photographic intentions.

I have been itching for a decent photographic position of a particular tree down the street from us. For years, we have watched daily as birds fly in to it and roost for the night. I even posted about it earlier this year — there’s a nice sound byte with it.

This very small ‘junk tree’ gets inundated with large water birds every night, weighted down to very nearly its breaking point. It’s one of the coolest things I’ve ever seen, and I feel privileged to get to enjoy it all from within my subdivision’s boundaries. What amazes me most is that many of my neighbors don’t seem to know anything of it, oblivious to this regular natural event.

So tonight, the roosting tree exists just for me to enjoy. For this night, I’m happy that most people are tuning out nature and tuning instead to their smartphones and TV’s, spending their evenings with football and soccer. I get the fields, the birds, and the views all to myself.

A few nights ago, Angie and I tried on bikes to see if we could get a decent camera angle, without getting killed by traffic.

Nope. Not gonna cut it.

Okay, that’s a better position, but there’s not enough lighting from the west.

This is proving to be a real photographic challenge if ever there was one, not only with the low evening lighting but the vantage point — the best one is at the busiest intersection in our area. Hm.

So I braved the commuters, left the kids at home, and got out on foot to try some different angles. I had to park in several locations and use ditches, fire hydrants — whatever happened to be there — to be able to crop out the wires and traffic and new construction.

As I was rolling out to head back home, I shot this photo from the intersection, which is really the perfect location for framing out the construction, electrical wires, and automobile traffic. Thank goodness I had the long lens in my lap ready to go. Some guy was honking at me…

Settled in for the night.
Taken in the van, at the intersection…
someone honking at me to go, already!

It was all so very worth the ‘trouble’ I was put through.

Photographers: Have you ever had a challenge
that you just couldn’t step away from?

17 thoughts on “Dramatic Skies And A Roosting Tree”