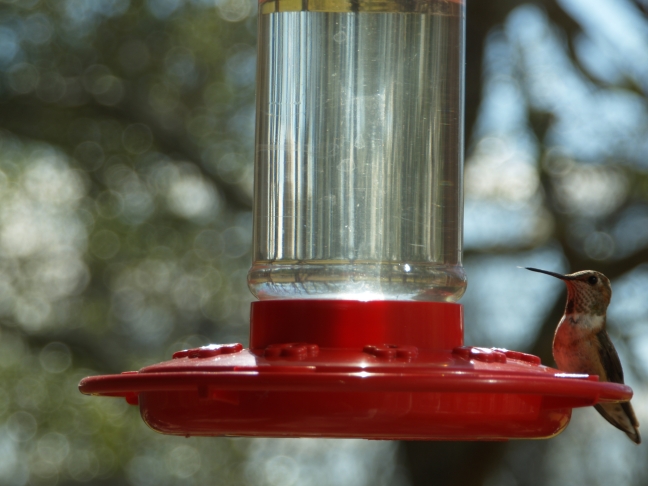 “This could all be yours someday.”  ~ Guster

Little did we know what Christmas would spark.  When Scottie came in to tell me, There is a Rufous in our tree, I brushed him off in usual fashion.  I thought he probably just wishes there was one, much like the wood stork he talks about could be in our creek out back — but equally as unlikely.  He spends a lot of free time on the iBird Pro app and I can’t tell fact from fiction, especially when he’s deep in the business of learning about something.  I hear about some bird fact no less than 10 times per hour.  A mother can only humor a boy so much.

“There’s a Rufous on our feeder, Mom!  He’s on our feeder right now!”  He was looking out the window now, binoculars hanging around his neck.

I keep it right outside, in view of the sink, so we can watch for any stragglers during the winter time.  Usually, a Ruby-throated visits the feeder, one that didn’t quite make his migration trek.  Some will even hang out all winter long, so long as there is something to eat.  (They can always count on me to keep it filled.) A Rufous, huh?  This I had to see.

But there he sat, as my skepticism vanished, a beautiful male Rufous hummingbird, his unmistakable red-orange and green plumage just like the picture in the book.  Scottie was right.

Almost immediately, another showed up.  Not one, but two — perhaps even three — of this rare bird was hanging out in our backyard, on our feeder.  Though I was unable to get any of one of them in flight, I snapped this photo of a female just as she lighted.

I couldn’t believe it.  Not only had he spotted a hummingbird in the winter, but he correctly ID’d its species……in the trees before it had even come down to take a sip.  I really should pay more attention to this kid.  He’s got a gift.

Along came the Ruby-throated to the punch bowl.  It’s always fun until another hummer is in the area.  These birds will joust each others rather than drink, the skinnier, plainer Ruby, contrasted with the more flashy, curvaceous Rufous.  It’s worth setting all work aside just to stand and spectate.  They just won’t let each other drink, spending  all their time guarding and fighting over the feeder.   Here’s a really good shot of her, taken by Robert Hanelt in New Mexico.   (Unfortunately, I’m unable to display it here.)

Then the most amazing thing happened.  On the First Day of the Year, 2014, perhaps they got tired or were just hungry enough.  Whatever the reason, they set aside their differences and the Ruby and the Rufous dined together on the feeder, for a good long drink.

We all stopped what we were doing and rushed to the window to watch these two beautiful little birds, together, only for a minute, this special time we may never witness again.

Winter is time for the big slow down and is extraordinary for backyard birding.  Just as the sun reaches its lowest point in the sky, feathered beauties begin to gather outside our breakfast room window.  The local squirrel population sufficiently out-smarted by our strategic feeder location — with the exception of one really smart one — the little birds get to enjoy their sunflower seeds and warm birdbath all to themselves, on the relative safety of our back porch.  We get to enjoy family walks between the kitchen and the creek, binoculars at-the-ready, ears pricked for new sounds, bird books waiting for the thumbing.  It’s all about the birds.

It’s a veritable paradise right here.  Scottie and Angie fill their respective Birding Journals with new species as they see them, adding them to the 50+ variety that we see regularly every day:

Coming into the 100’s territory has sparked what we now refer to as The Big Year, inspired by the movie with the same name.  Beginning on January 1, 2014, they are determined to log as many bird species as they can before then end of this calendar year.   They are already off to a great start.

Time to kick things into high gear for these budding naturalists.

The immediate Texas Gulf Coast can also be a birding oasis.  This time of year, not much is going on aside from the wintering water residents.  The spring migration is only in just a few more months, when hundreds of species begin to move from their winter homes to their spring homes.  Texas is unique in that it is right smack-dab in the middle of three of the four migratory routes in North America:  the Central, Mississippi, and Atlantic Flyways.  Migrating birds travel quite long distances — our Rufous nests all the way up in Alaksa! — and need to both rest up and tank up before finishing their journeys to a final destination.

Along the coastline, just east of Galveston, there is a sweet spot for these weary birds — a sprawling oak canopy atop a salt dome where the water is fresh and food is abundant.  High Island is their Motel 6.  There is nothing else like it for miles.  Driving to it, the area is surrounded by salt marsh and grasses and otherwise open wetlands.  The sanctuary sticks out like sore thumb.  Given the thousands of miles these birds travel each year, it’s no wonder they’ve pinned it on their GPS.

Given our own Big Year, and being the planners we are, it made sense that we go check it out beforehand.  Scottie was excited to maybe get to see his first wood stork.  (I didn’t have the heart to tell him we probably wouldn’t…but secretly hoped he might surprise me again.)

We arrived at the Boy Scout Woods in a little more than an hour from the interstate, on a cool but otherwise beautiful, sunny Sunday.  As we walked in the gate, devoid of any other non-feathered two-legged species, our family was promptly greeted by a Ruby-throated hummingbird.  She flew straight to our noses to get a better look.  I was half-expecting Tinkerbell to usher her off.

On this particular trip, we saw mostly birds we already see around our part of town, those who are regular winter residents.  But we also saw this guy, unsure whether he was working to trick us or not, right down to the glaze-y, opened eyes.

Unexpectedly, we also got to add a few more species to our Life List:  the Cinnamon Teal, Brown Thrasher, American Pipit, Band-rumped Storm-petrel, Gulf-billed Tern and the Black-crowned Night Heron.  In fact, three of the four kids correctly identified this drab-looking juvenile perched in the trees at eye level just a few feet away.  The closest I could get on ID was “it’s a heron of some kind.”  When I looked up the photo for their choice, it was spot on.

See?  Again, it appears I can learn a thing or two in my middle aged-ness.  From now on, I will watch and listen more to see what it is these fine little people can share.

Much to Scottie’s dismay, there was no wood stork to be found.  Maybe next time.

It’s hard to believe that all around this fresh water pond is salty OCEAN.

Oak canopy is the perfect stop for weary travelers. 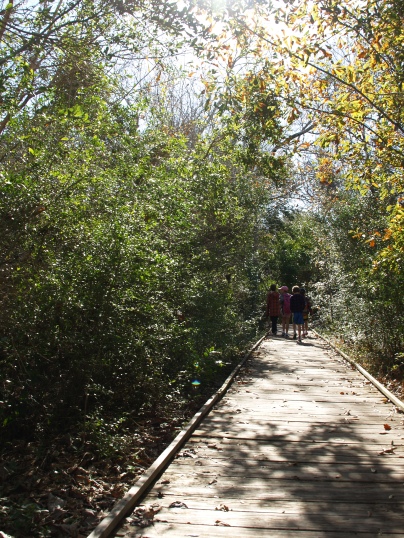 Amazing how quiet kids get when listening for new birds 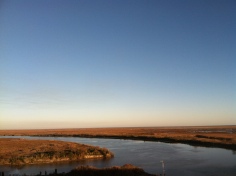 Oyster and seashells are pretty crushed up on shore 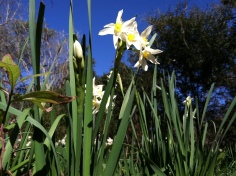 Once the hiking and birding had played out, it was time for the beach.  The kids were longing to get their feet in the very cold sand and water.

I kept my hoodie snugged tightly around my chin and watched as the pelicans and cormorants flew over, feet dry on the shore.  I remember being a kid on the coast and how splendid it feels to run in the waves.  My need to stay warm and dry now that I’m older, though, beats the urge.

If all goes well — and provided we can somehow get squeezed into limited accommodations during this popular migration — we will be among the masses who visit this tiny oasis in the spring.  The kids have high hopes to earn their badges and their stature as Real Birders and Mini-Naturalists.

At the very least, they have earned respect as their mother’s own personal walking bird books.  And indeed, they have again won over my heart.

This could all be yours some day, kids.
Let’s take good care of it.